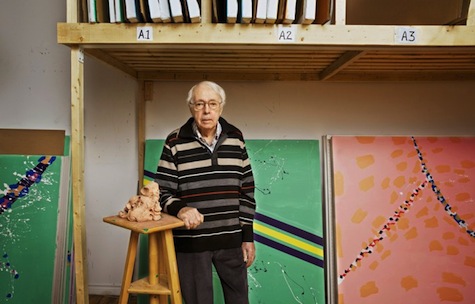 Awarded by the Quebec government, the $30,000 prize recognizes outstanding work in the area of visual arts, architecture and design.

Born on February 18, 1925, Barbeau first came to prominence as a member of the Automatiste movement in 1940s Montréal. This movement emphasized a spontaneous or “automatic” approach to painting and was led largely by one of Barbeau’s teachers, Borduas.

Like other important Automatistes, Barbeau was an enthusiastic signatory to the Refus global manifesto of 1948, which called for liberation from typical Quebec values of the time.

In his seven decades of production, Barbeau has created more than 4,000 artworks, often elegant abstract paintings and sculptures. He has also integrated aspects of op art, sound art and public art in his oeuvre. (Last year, as an example of the latter, he installed a mural in the Ecole de métiers de la construction in Montréal.)

Barbeau continues to produce painting and sculpture today at 88 years of age. The past year has been a significant one for him; he won the Governor General’s Award in March, and the Prix Louis-Philippe-Hébert in May. His work was included in “L’art en guerre. France 1938–1947: From Picasso to Dubuffet” at the Guggenheim Bilbao, which ended in September, and he currently has a solo exhibition at Galerie Chauvy in Paris until November 23.

Past winners of the Prix Borduas include Betty Goodwin, Marcelle Ferron, Guido Molinari and Bill Vazan.

Photo Credit:
Marcel Barbeau in his studio in a photo taken on the occasion of his 2013 Governor General’s Award win / photo Martin Lipman, Canada Council for the Arts