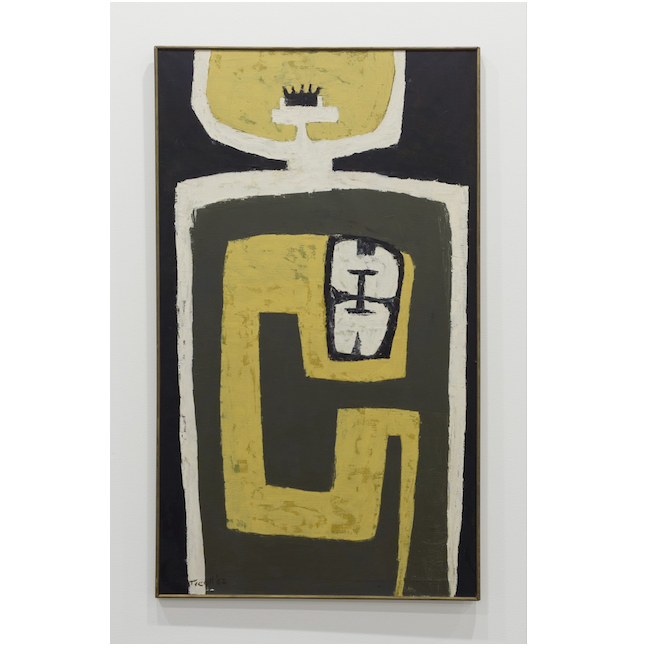 In 1962 and 1963, Calgary-born artist Marion Nicoll created the Ritual Series (Ritual I, 1962 and Ritual II, 1963, Alberta Foundation for the Arts). For Nicoll, the idea of working in a series began in 1959 when she was on a summer trip to Italy, Spain and Portugal, and after a period of study in New York with American painter-printmaker, Will Barnet (1911-2012). Nicoll’s European travels spawned her first three bodies of work developed in series—the Sicily, Rome and Madrid Series. Over the next decade, following her return to Alberta in August 1959, Nicoll developed another nine bodies of work in series: Presence (I-IX), Alberta (I-XIV) Chinook (I-IV), Ritual (I-II), Omen (I-II), Calgary (I-IV), Foothills (I-II), Guaycura (I-II) and Runes (I-II). The Presence and Ritual Series were the two bodies of work in which the figure played a central role. Because the Ritual Series was capped at two paintings, Ritual I is the only painting in the private market. Although much of Nicoll’s abstract work developed in response to the landscape around her, it was her larger environment, including the figurative element, that formed the many points of departure for her hard-edge abstractions of the 1960s for which she has been widely recognized in and beyond Canada.

Ritual I is a lesser-known painting in Nicoll’s ouevre because the last known occasion when it was exhibited was her 1965 show at the short-lived Yellow Door Gallery, Winnipeg, Manitoba. [1] An exhibition review in the Winnipeg Free Press offers the only known historical context for the painting, probably the result of an interview with the artist given the reviewers depth of commentary. Ken Winters noted: “Ritual I is …apparently a symbol for the moment of conception; the first subdivision of the living cell in the maternal body.” [2] Winters’ review compared Ritual I to another painting called Pregnant Woman (location unknown). The second painting in the Ritual series, Ritual II, also alludes to the gestational and birthing processes. We can be assured then that Nicoll had her mind on the female body and procreation as her points of departure for all three paintings.

The microcosm of human reproduction may not initially strike the viewer as the artist’s point of departure for Ritual I but close analysis supports Winters’ assessment. Nicoll has pared down the human form to absolute brevity by dividing her composition into the torso and head-shaped forms which occupy the lower three-quarters and upper quarter of the composition. Centred in the torso, a maze-like structure leads the viewer inward to a fertilized embryo. Perched inside the head shaped form a tiny crown pays symbolic respect to the female body’s procreative power. Nicoll’s colours are spare—yellow, white, black and grey—with the high contrast areas drawing the viewer into the painting’s symbolic central area. As always, her choices yielded a harmonious overall image wherein one colour does not predominate over the whole. Her surface is unusually mottled with palette-knife texturing, as compared with the smoother hard-edge approach in Ritual II and common among many other 1960s abstractions. Although most of Nicoll’s painting of this period is smooth, hard-edge abstraction, her interest in a textured surface was not an anomaly. In 1959, she experimented with the encaustic (wax) process for God Out of the Night, 1969 (Leighton Art Centre), and in her printmaking practice she experimented with textured substrates such as Expanding White, 1960 (Alberta Foundation for the Arts), printed on a j-cloth cleaning towel.

Nicoll had been well schooled in figurative drawing at the Ontario College of Art in Toronto where she studied under portraitist John Alfsen (1902-1971) and various members of the Group of Seven who were all trained in academic figure drawing. Recently, Nicoll’s 1959 travels to Europe included seeing her favorite Italian and Spanish artists—Giotto (1267-1337), Cimabue (1240-1302), El Greco (1541-1614) and Francisco Goya (1746-1828). [3] These artists’ timeless iterations of the figure and infant putti may have inspired Nicoll to revisit a subject she had parked since the late 1920s. The task in Ritual I though was not verisimilitude as her old class days had called for.

Nicoll was between age fifty-three and fifty-four when she created the Ritual Series, well past her own biological clock of being able to have children of her own. The message of the Ritual Series may or may not have been autobiographical but what is consistent about it with other bodies of Nicoll’s work is her preoccupation with cycles of life and the passing of time. Take for example her many works detailing times of day (Bowness Road, 2 AM, 1963), seasons and months of the year (January, February and March, all 1968), and ephemeral moments soon to pass (End of Summer, 1963, Eclipse, 1963, Moon in the Morning, 1962 and so on). Ritual I, Ritual II and Pregnant Woman each detail the passing of time through the procreative cycle.

That Nicoll chose the female body as her point of departure for the Ritual Series only underscores her feminist world view that, throughout her practice, asserted the significance of women’s lives at every turn. Equally, her message in the Ritual Series was consistent with her larger goals as abstract painter—painter of the enduring forces of time and the brevity of life.