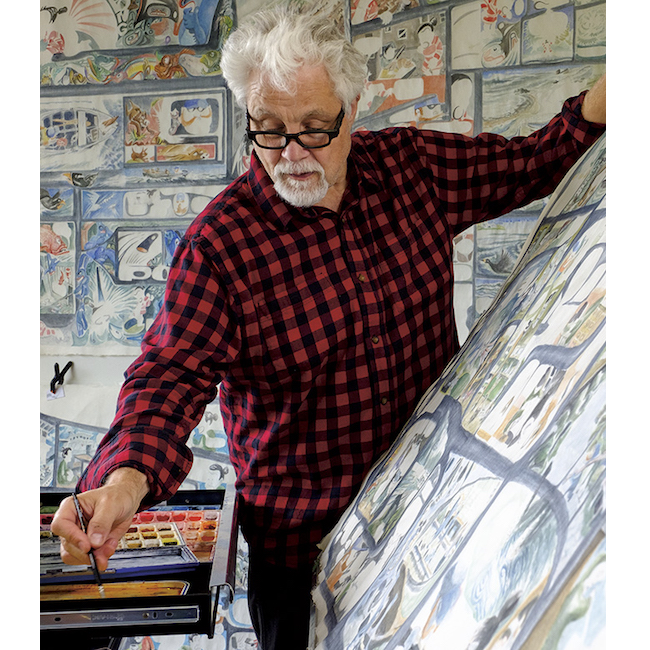 Twenty years ago, Michael Nicoll Yahgulanaas pioneered a new style of art: Haida manga, a mashup inspired by his own Indigenous heritage and the style of Japanese comics. Eight illustrated novels and many international exhibitions later, he’s going beyond ink and paper, working with an architecture firm to integrate Haida manga into three new skyscrapers in Vancouver, and writing a libretto based on his graphic novel, Flight of the Hummingbird, for the Vancouver Opera. We caught up with him at home on an island in the Salish Sea before a trip to Seoul.

I’m a light packer. I only take three of everything, max.

How did you first discover manga?

In the late 1990s, I helped organize a West Coast trip for a professor friend’s Japanese university students. We went deep into the forest for 10 days, and it was from the students that I learned about Asia’s appreciation for manga. It was puzzling to hear the style was considered highly technical, because at the time in North America, it was seen as doodling. I then had the idea of merging my Indigenous voice with this Asian art form.

In 2017, you were commissioned by the Seattle Art Museum to create a mural for their collection. What’s it like?

It is six large sheets of Japanese paper that, when combined, create a 6×2-metre watercolour-and-ink painting that considers the relationship between humans and the ocean. It’s complex and the entire space is filled. The mural, called Carpe Fin, is now in their permanent collection, and it will be exhibited from November 2, 2019 to November 1, 2020.

Do you travel to Japan often?

Yes. In my family there are stories going back to 1894 of Haida people visiting Japan and being welcomed as full persons, which was not the case in Canada at the time. When I visit now, I go to remote areas, like Mount Koyasan.