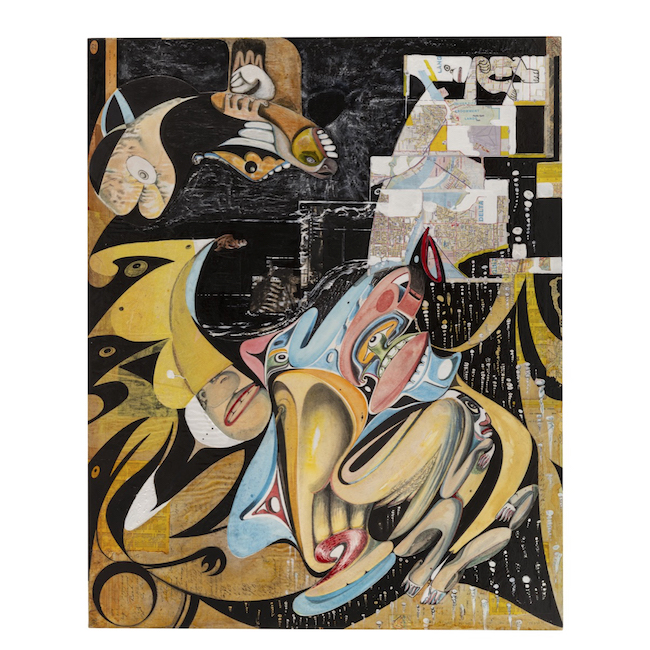 In the late 1990s, after studying Chinese brush techniques, Yahgulanaas consciously began to merge Haida and Asian artistic influences into his self-taught practice, and innovated the aesthetic called “Haida Manga,” that crosses cultures and disciplines.

Haida Manga blends North Pacific Indigenous iconographies and framelines with the graphic dynamism of Asian manga. Notable publications include the national bestsellers RED, a Haida Manga (2009) and Flight of the Hummingbird (2008). The Museum of Anthropology, Vancouver recently acquired the original mural RED, a Haida Manga, inspired by the book of the same title – for its permanent collection. Flight of the Hummingbird served as inspiration for an opera co-produced and commissioned by Vancouver Opera and Pacific Opera Victoria, and is slated to be performed in 2022.

In 2007, Yahgulanaas inaugurated his Coppers from the Hood series at the Museum of Anthropology in Vancouver. These sculptures are made from the hoods of cars, in homage to the Haida coppers that are traditionally exchanged during potlatches. Today, more than a dozen sculptures from this series are held in public and private collections around the globe – the most notable being Yelthadaas (2010) at The Metropolitan Museum of Art, New York City and Copper from the Hood, (2011) at the British Museum, London.

Michael Nicoll Yahgulanaas was born in Prince Rupert, British Columbia in 1954 and grew up alongside Delkatla, near the fishing village off Masset on Haida Gwaii, off the north coast of British Columbia. He is a descendant of the iconic artists Isabella Edenshaw and Charles Edenshaw, and Delores Churchill. He lives and works in Vancouver, British Columbia. His work has been seen in public spaces, museums, galleries and private collections across the globe. Institutional collections include the British Museum, Metropolitan Museum of Art, Seattle Art Museum and Vancouver Art Gallery, to name a few. Solo exhibitions of note include: Carpe Fin, Seattle Art Museum (2019/20); Seriousness of Play, Bill Reid Museum, Vancouver (2015); Michael Nicoll Yahgulanaas and Edward Burtynsky, Glenbow Museum, Calgary (2009).  Group exhibitions of note include: SDING K’AWXANGS–HAIDA: SUPERNATURAL STORIES, McCord Museum, Montréal (2019);  Indigenous Beauty,Seattle Art Museum (2015); Beat Nation, Vancouver Art Gallery (2012). and Extraordinary Stories from the British Museum, Western Australian Museum, Perth, Australia (2012), to name a few.