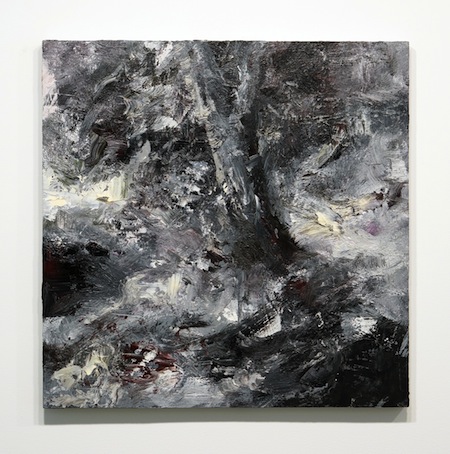 Please join TrépanierBaer for the opening reception Saturday, September 8 from 1:00 – 5:00 p.m. MIchael Smith will be in attendance.

Michael Smith’s practice as an artist is rooted in the long history of landscape painting with influences from Poussin and Hobbema to Constable, and more recent painters such as Ian McKeever. Like Poussin, Smith believes that landscape painting is not a reflection of nature but rather a genre of painting, a stage to enact the imagination. “When I look at a landscape, it is full of memories and expectations, it’s a performance of the imagination,” says Smith.

In his quest for interpretation Smith marries his interest in art history with new technologies taking images from films and videos;  photocopying, cropping and restaging them.  He listens to podcasts:  “The watercolours / drawings I make as I listen to podcasts of short stories. Often I scribe words, letters and sentences that catch my attention – these are like motes or ‘letter-debris’ and branches infiltrating the space of the paper.”

With this new work Michael Smith continues to “…delight in the play of paint, spelling out thoughts in layers of colour and light, creating a new history of a moment – the moment of a landscape’s making.” (TrépanierBaer Press Release 2009)

Michael Smith was born in Derby, England in 1951 and immigrated to Canada in 1978. He obtained a Masters in Fine Arts from Concordia University in 1983 and currently works and lives in Montréal. He has had a solid exhibition history of both solo and group exhibitions in North America and in parts of Europe and Asia, including group exhibitions in Kaohsiung (Taiwan), Prague, Brussels and Berlin. Recent solo exhibitions of note include Luminocratic, ART45, Montréal in 2010 and Michael Smith: Wresting Vision, Conjuring Place at the Art Gallery of Peel, Brampton, Ontario that same year.

Michael Smith has been a Visiting Artist and given artist talks t at various institutions across Canada such as the Ontario College of Art and Design; York University; the Art Gallery of Nova Scotia; the Nova Scotia College of Art and Design; the Appleton Museum of Art, Ocala, Florida; the Alberta College of Art + Design; the University of Lethbridge; and Concordia University. His work is well presented in both private and public collections including the Musée national des beaux-arts du Québec, the Montréal Museum of Fine Arts, Musée d’art contemporain, Montréal and Museum London to name a few. He is the recipient of several grants from the Canada Council and from the Ministère des Affaires culturelles du Québec.

TrépanierBaer has represented Michael Smith since 1992.