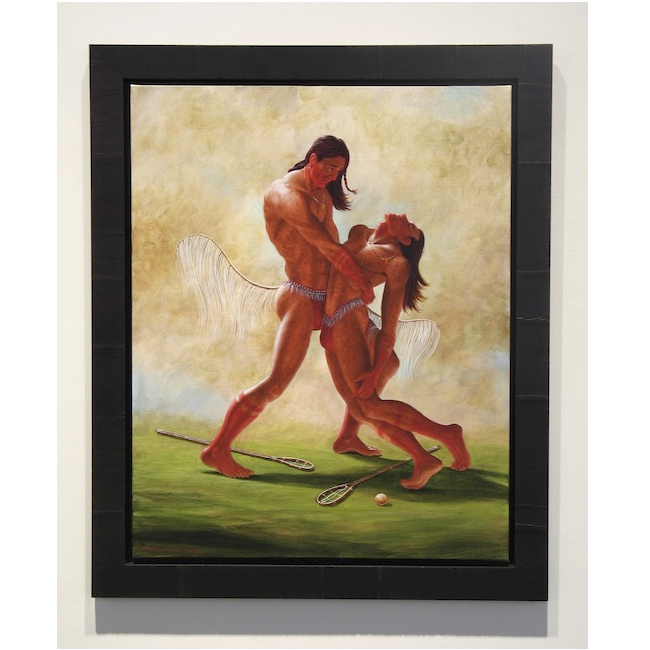 Today we honour National Indigenous Peoples Day in Canada. It is an occasion to celebrate the knowledge, practices, and cultural contributions of First Peoples from an extraordinary diversity of communities across the country.

Pictured herewith is the painting titled The Death of Hyacinthus by Kent Monkman, an artist of Cree ancestry. The scope of Monkman’s practice encompasses a variety of media including painting, film/video, performance, and installation. Monkman’s work figures amongst a new generation of First Nations artists in Canada whose practices look to the past inherent in their ancestry, and to present conceptions and attitudes towards First Nations populations today.

In Greek mythology, Hyacinthus was a beautiful Spartan prince and lover of the god Apollo. Together, they hunted and participated in many forms of sport. One day they had a friendly competition taking turns throwing a discus. Apollo threw first, with such strength that the discus slit the clouds in the sky. Hyacinthus ran behind it to catch it. But as the discus hit the ground and bounced back, it hit his head and wounded him fatally. Apollo’s face turned pale as his dying lover as he held him in his arms. [ Homer, Illiad, ii.595-600 (c. 700 BC)]

As he so often does, Kent Monkman has re-inscribed this tale – often depicted in art in the last 500 years (cf. The Death of Hyacinthus, 1801 by Jean Broc) – in an Indigenous context. Both Hyacinthus and Apollo were playing lacrosse, a sport with its origins in a tribal game played by various Indigenous peoples of North America. The immortal Apollo is distinguished by feathered wings as he cradles his dead lover in his arms. Aboriginal culture recognized and revered individuals within their tribes who were two-spirited. Monkman pays homage to this identity through the story of Apollo and Hyacinthus. Ultimately, this tragic and mournful work is about love, and the death or loss of a lover.