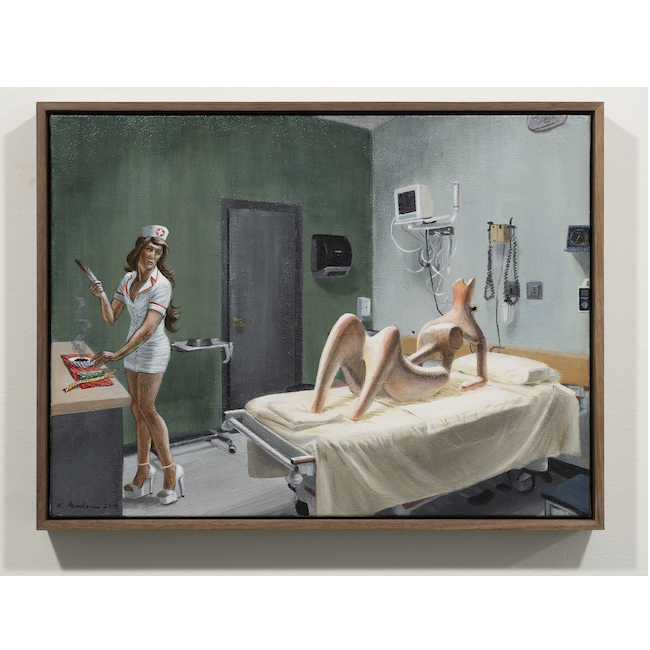 TrépanierBaer is pleased to present a new acquisition at the gallery. On view now is Kent Monkman’s Good Medicine, a unique and intimate painting from 2013.  This is a  opportunity to see a rare and relatively early painting by the artist.

Kent Monkman’s work explores themes of colonization, sexuality, loss and resilience – the complexities of historic and contemporary Indigenous experience. His alter-ego, Miss Chief Eagle Testickle, appears throughout his paintings, sculptures, performances and videos as an agent provocateur and trickster who upends received notions of history and Indigenous people.

Kent Monkman revisited this narrative and expanded it in form, medium and size in his critically acclaimed video and installation work titled Casualties of Modernity, 2015. It was was commissioned by the Bank of Montreal for its Project Room curated by Dawn Cain, subsequently acquired by the National Gallery of Canada, and was shown in its 2017 Canadian Biennial.

Miss Chief is the “star” of Monkman’s Casualties of Modernity. The work is a satirical look at art through Miss Chief’s eyes, foregrounding the artist’s critique of modern art through the downfall of romanticism, cubism and primitivism. She wears the same tight, white nurse’s uniform, tending to a figure recuperating on a bed in a basic hospital room, as in Good Medicine.

Good Medicine, 2013 is a preliminary study for the above installation, and is contemporaneous with Monkman’s large-scale Urban Res paintings, which also quote and satirize figures and images from the canon of Western art history.