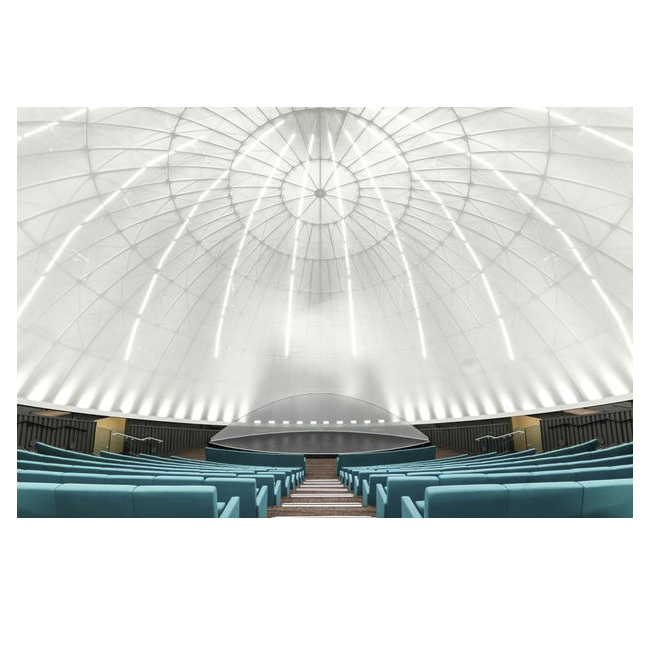 Marsah Lederman
The Globe and Mail

In Calgary, a concrete wonder dreamed up in the past as a place to imagine the future is now a home for the contemporary. The former Centennial Planetarium, a brutalist structure topped by a geodesic dome, reopens this weekend as Contemporary Calgary. The large contemporary art gallery is the culmination of years of efforts by collectors, artists, curators and philanthropists.

And it is a trip – back in time, around the maze of a building (once you find the entrance) and through a contemporary art experience Calgarians have long been craving.

It is an adaptive reuse that makes sense environmentally and economically – but also experientially. Even if at times a particular art installation might be challenged by – or even suffer from – the context of the former building, overall, it just adds to the delight.

“Everyone who walks in goes ‘oh wow I remember this.’ You can almost smell it, you know?,” chief curator Ryan Doherty says.

Contemporary Calgary was formed when three local art groups joined forces to bring this vision to life. Proving this was no pie-in-the-sky idea, they eventually secured a 25-year lease from the city, with an extension option, as well as $25-million in city-funded modernization work. The non-collecting institution has now completed the second phase of its planned four-part renovation. The estimated total price tag is $117-million.

Raising money – either from government or privately – was a different ball game when this venture began, before Alberta’s economic woes set in. Ottawa has committed $30-million, contingent on the province matching that. But CEO David Leinster projects confidence on the fundraising front, and says Calgarians recognize the need for a contemporary art space.

“Maybe some think of Calgary as the Calgary Stampede and a western town, but this is a place that has a really wonderful arts community,” Leinster says. He believes this project can “really help people understand that maybe Calgary’s a little more than meets the eye.” The cost of an annual membership is only $20.

Nostalgia and the building’s original intention were key themes as Contemporary Calgary dreamed up its opening exhibitions.

The Planetary exhibition features work created by more than 35 local artists in workshops and residencies at the building.