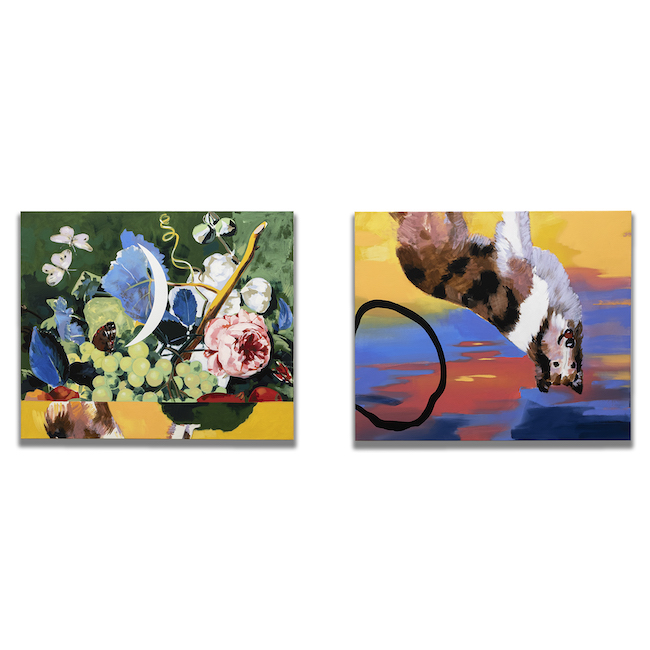 TrépanierBaer is pleased to present FALL OF THE ROMAN EMPIRE/(REFLECTION), a new, stunning and bold painting fresh from the studio of Ron Moppett.

FALL OF THE ROMAN EMPIRE/(REFLECTION) is a painting that holds space, time and memory.  At first glance, the left panel of this diptych depicts a close up of succulent spherical green grapes, and a single blush pink rose among verdant leaves and a few delicate butterflies, with a white waxing moon floating in the centre of the panel; the right panel presents a Collie dog posing in front of a sunset, and both are shown upside down. These dissimilar subjects are cleverly juxtaposed, like collaged sections: each panel presents its own distinctive space, marks a different moment in time in its execution, and re-presents a memory or trace of images gleaned from daily life.

Upon closer inspection it is noted that the front and back paws of the canine creature are actually depicted at the bottom of the left panel, beneath a marked straight line.  In the planning stage, Moppett had envisioned the canvases one atop the other, in a portrait-style alignment. This orientation changed to a horizontal, side by side format, and to encourage visual continuity, and to suggest the concept of reflection,  the dog’s paws appear in the left panel, beneath the fruit, flora, and fauna gleaned from a 17th century still life painting.

The poetics of the images in Moppett’s paintings, whose relationships operate like those gathered into a collage, begins when an image fragment is juxtaposed to another fragment, and the result is a revitalization of each of them….As noted, it is the nature of painting to manifest such ephemeral moments in material objects, but the divisions within his panels rupture conventional painting’s unified time, organic composition and indivisible surface. The genius of this method  lies in the medium which becomes the mechanism for new work, a vehicle  for Moppett’s boundless imaginative capacity for invention.