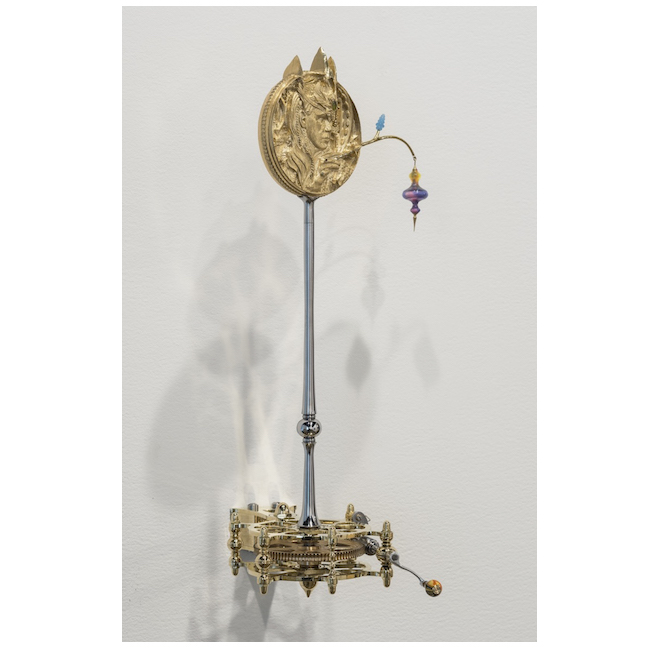 TrépanierBaer is pleased to announce the release of Chris Millar’s new work Galdranorn, 2021.

Magic, mystery, wonder, alchemy, and beauty are some of the key concepts or portals that have guided Chris Millar’s dichotomous belief that: “…magic is fiction while desiring it to be real,” an idea that has inspired much of Millar’s work over the past several years. Galdranorn, Icelandic for “a female person endowed with magical powers,” continues to expand the idea. A beautifully crafted kinetic sculpture is performative at its core, as are many of Chris Millar’s recent works. Galdranorn stands formally at the ready, inviting the viewer to take up its call to wind it into action, releasing its power to protect and defend hope and wonder against the darker forces of life and death.

Over the past several years, since his move to London, England in 2014 and back to Montréal in 2017, Chris Millar has created increasingly complex fantastical works in a studio that has become more machine shop (filled with lathes and pantograph engraving machines) than a painter’s studio, though painting figures largely in much of the work. This beautifully crafted wall mounted sculpture made of brass, steel, resin and semi-precious gemstones is like an outtake from one of his recent works.  As the critic Nancy Tousley notes in her description of an earlier miniature work: “…  as though this were not a representation at all, but an artifact of Millar’s universe that landed on Earth after it slipped out of his spiralling galaxies which began like everything else did, with a doodle.”

Part of a new series of limited edition hand engraved sculptures, Galdranorn is now on view and available at TrépanierBaer.

For more information about this new work and Chris Millar please contact the gallery at info@tbg1.com or by calling at 403-244-2066.