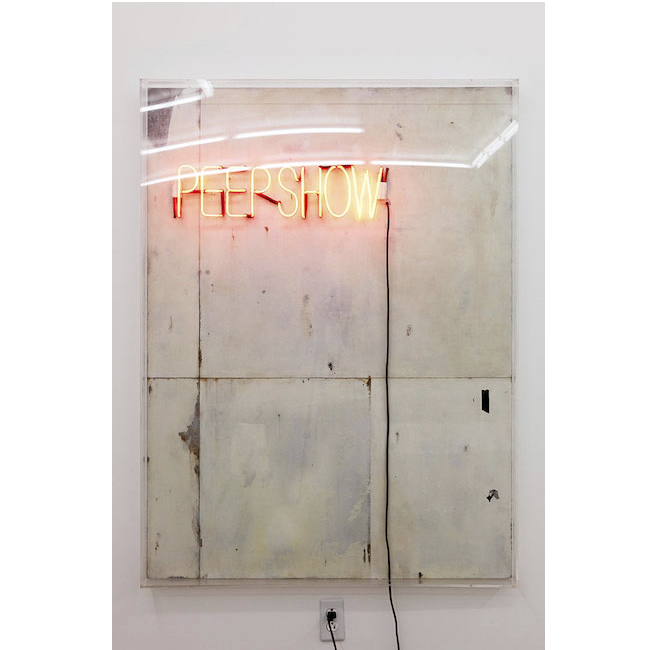 The ninth installment in curator Nancy Tousley’s ongoing series features new work by emerging Calgary artist Kent Merriman Jr., whose highly laborious sculptural paintings fool the eye by masquerading as flattened cardboard boxes, poured concrete, rusted metal panels and clear plastic baggies. As important as the objects are, it is the element of time and its effect on them that truly inspires him. The impeccable surfaces of his paintings, with their flawlessly rendered rusted lacerations, scars and bumps, serve as more than mere representations of the real; instead the works mysteriously transform into quiet metaphors for the fragile, vulnerable and finite realities of our lives.

Kent Merriman Jr. pushes the boundaries of traditional painting and two-dimensional illusion until the latter breaks open into the three-dimensional world.

What are these ordinary things plucked from the flow of the visual that surround us every day? Signs of use, wear, deterioration and degradation mark their surfaces and imbue them with histories and a sense of existence through time. They inhabit our space. Are these things made of paint – fragments of walls, metal panels, a rubber band caught in a cyclone fence, a flattened cardboard box, a baggie – reality or fiction? Their vivid material existence suggests that there is a third possibility.

With startling trompe l’oeil realism, this 33-year-old Calgary artist makes paintings that bring the medium into the realm of sculpture. His closely observed paintings take on the character and 3D physicality of the objects they depict. They present a challenge to the limits of painting as representation and challenge the viewer’s grasp of reality.

The 10 paintings in this One New Work exhibition will both hang on the wall and lie on the floor in an installation that will enhance their remarkable presence as objects.

To read the booklet produced to accompany the exhibition, please open the PDF listed below.