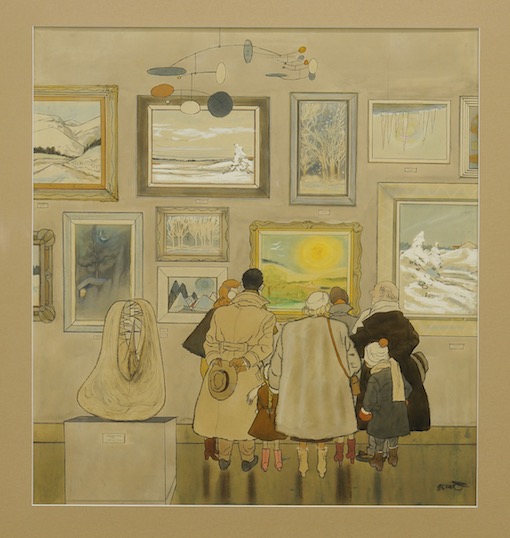 TrépanierBaer is pleased to announce that Untitled, IWC 142, 1952 by Oscar Cahén has been selected for inclusion in the exhibition 150 Years/150 Artworks: Art in Canada as a Historical Act. This work was created specifically for the cover of the January 12, 1952 issue of Maclean’s magazine.

Organized by the Galerie de l’Université du Québec à Montréal, under the leadership of Louise Déry,  150 Years/150 Artworks: Art in Canada as a Historical Act  acknowledges art in Canadian history by celebrating artworks that shaped or transformed it. A total of 150 works were chosen to cover 150 years of Canada.

In addition to being one of Canada’s great painters, Oscar Cahén was also, at one time, and for many years, Canada’s top illustrator. He was the highest paid, the recipient of most of the awards available to the profession, and the most sought after. He worked for The Montreal Standard, Châtelaine, the New Liberty Magazine, Maclean’s, and many other publications.

This work is on view and available at TrépanierBaer Gallery.

On September 23rd, 2017, the Beaverbrook Art Gallery opened the most comprehensive exhibition to date of Oscar Cahén’s work. Curated by Jeffrey Spalding, it is supported by a significant publication titled Oscar Cahén, co-published by The Cahén Archives and the Beaverbrook Art Gallery. With texts by esteemed art historians Roald Nasgaard, Karen Wilkin, Adam Welch, Jeffrey Spalding, and Jaleen Grove, among others, the book, like the exhibition, sheds new light on Oscar Cahén’s life and career.

This beautifully illustrated book will be available for purchase in mid-December.