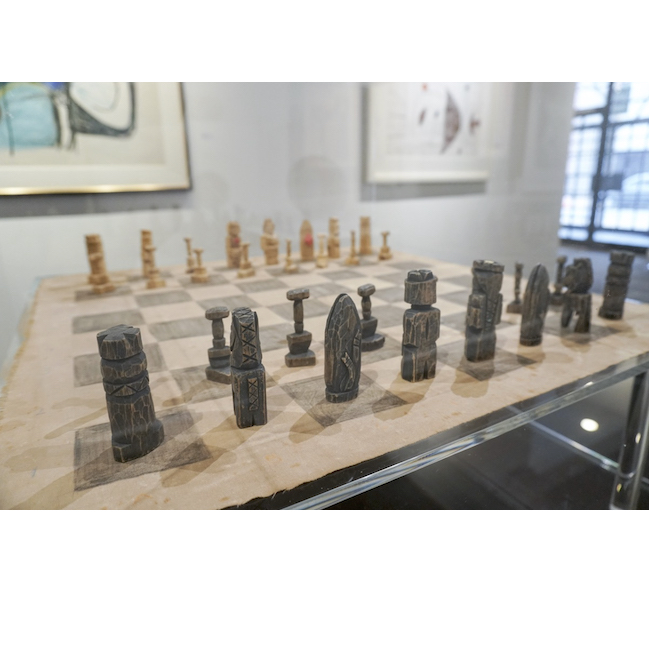 Amongst the works on view in Discovering Oscar Cahén: The Warrior is an improvised chess set made while the artist was a prisoner of war in Canada in the 1940s.

As previously noted, Oscar Cahén’s life was marked by many traumatic experiences. Born in 1916 to a German-Jewish family, by 1933 the Cahéns were robbed of their German citizenship and forced to flee. By 1935 and onwards, Cahén was selling his drawings, cartoons, and graphic designs to help support his family financially, and he sought out work in places like Prague and Britain but was forced to leave each time as he was suspected of being a German spy. In May of 1940, along with over two thousand other German-Jews, Cahén was brought to Sherbrooke, Québec where he was interned at Camp N as a prisoner of war. He was 24 years old and would remain there for two long years.

Conditions in this camp were dismal; interns  made the best of the situation to survive both physically and psychologically. Cahén drew often, and his drawings counted as currency amongst both interns and officers. Creature comforts were at a bare minimum, forcing many interns to improvise with what they had, so Cahén transformed primitive materials into a stylized chess set that would help interns pass the time in the evenings and keep their minds sharp and focused.

A simple pencil was used to hand colour dark alternating squares on a piece of remnant fabric; and the requisite characters of queens, kings, bishops, knights, rooks and pawns were carved from found pieces of scrap wood with minimal painting of isolated motifs in bright colours. The figures themselves are abstracted geometrical forms that are simple and elegant.

On the one hand, these chess pieces would have been carved using rudimentary tools which could explain their basic appearance. On the other hand and more importantly, as an artist, Cahén was acutely aware of currents in Fauvist and Cubist movements in the visual arts in Europe at the turn of the century and beyond, where figuration was simplified, and artists drew inspiration from other visual languages, such as the aesthetic from sculptures and masks from the African continent, for example. Cahén’s cast of  characters express these currents and are a testament to how their imagery successfully translates to different media, in this case, discarded pieces of wood, and elevates the humble nature of the medium into something quite refined, despite its circumstances.

Cahén was released from the camp in 1942: of the few possessions he had, his chess set came with him. Today, the checkered fabric is stained, used and worn with deep creases on the folds, while the wood figures are darkened due to use and handling during a very trying time for the inmates who once played chess using this set. One can only imagine the infinite number of games these characters witnessed, and how they marked the passage of time that moved far, far to slow for those in Camp N.

The exhibition Discovering Oscar Cahén: The Warrior has been extended until January 29, 2022 at Feheley Fine Arts, Toronto.