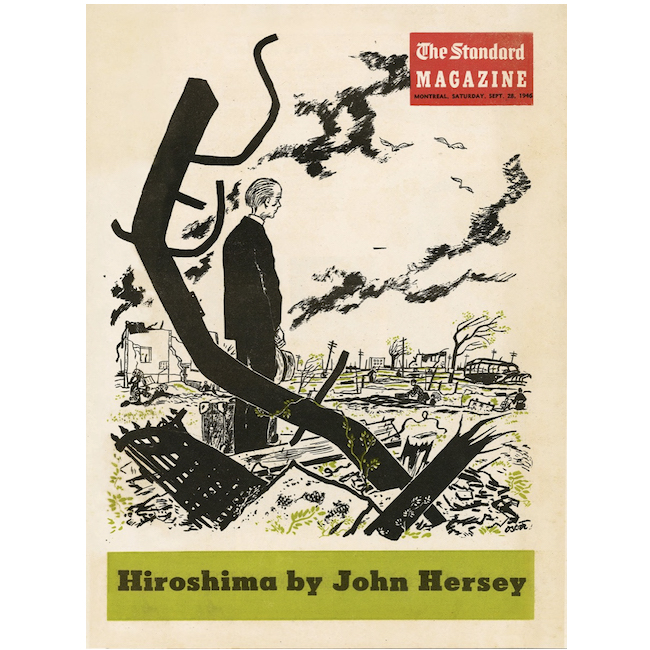 Between 1942 – the year of his release from the prisoner of war camp in Sherbrooke, Québec at the age of 26 – until his untimely death in an automobile accident in Oakville, Ontario in 1956, Oscar Cahén became Canada’s top illustrator.

He was the highest paid, the recipient of most of the awards available to the profession, and the most sought after. He worked for the Montréal Standard, Châtelaine, the New Liberty Magazine, Maclean’s, and many other publications. During his 8-year service through to his death in November of 1956, Maclean’s magazine published 2 issues per month (192 issues). During this time frame, Oscar Cahén contributed to 37 Maclean’s magazine cover illustrations, and his illustrations appeared in 140 of their 192 issues.

Because of his experience as a refugee, Cahén was often asked to illustrate war-related stories, and consequently, he secured commissions from publications like The Standard Magazine to produce visuals for hard hitting and critical stories by journalists such as John Hersey’s recounting of Hiroshima’s obliteration by nuclear attack first published in the New Yorker, and later for The Standard Magazine in 1946. In addition to the cover illustration for Hiroshima, the commission included 14 illustrations of survivors and rebuilding efforts.

Journalist John Hersey’s recounting of Hiroshima’s obliteration by nuclear attack on August 6, 1945 (first published in The New Yorker) describes the suffering of civilians from radiation in grisly detail. In what may be a research sketch, Cahén drew a horrifically injured woman. But Hiroshima required a treatment suitable for the newspaper’s general audience—“Not too much blood, please!” the client pleaded.The illustrations also had to solicit sympathy for the victims—no small feat given that Japan was regarded as the deserving enemy at the time. Additionally, Cahén had to work in a style that would translate well in solid colours on newsprint.

Cahén chose to portray realistically proportioned figures free of caricature, rendered only in black line. The cover shows vulnerable people: an elderly man, hat respectfully held in his hand, and foraging women and children dwarfed by a wasted landscape. The menacing, abstract shape of twisted wreckage in the foreground not only indicates the force of the blast but also nods to Japanese woodcut design, where refined use of asymmetrical shapes to frame a scene and make an interesting formal composition is esteemed. Similar devices appear later in Cahén’s abstract works.

Hiroshima was a major commission, including an additional fourteen spot-illustrations of survivors, wreckage, and rebuilding efforts, and four decorated capital letters. When the American literary agents saw Cahén’s work, they wrote him to say that of all the illustration done for the eight hundred publications of Hiroshima worldwide, Cahén’s were their favourite.

To read the article published in The New Yorker, please click here.