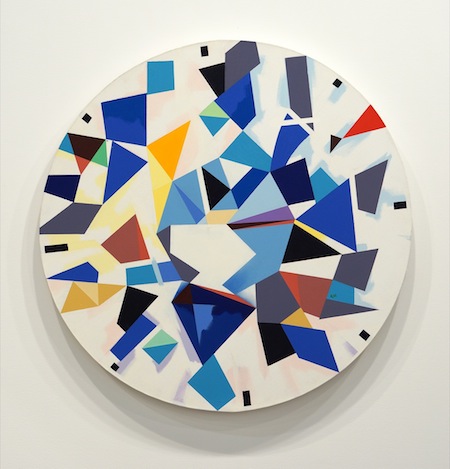 The artist will be in attendance.

In the wake of the unveiling of THESAMEWAYBETTER/READER, Ron Moppett’s spectacular public artwork recently installed in Calgary’s East Village, TrépanierBaer is pleased to announce the opening of the exhibition Mosaic on Saturday, November 24, 2012.

The exhibition will feature a variety of works from various periods of the artist’s career including several new large-scale paintings and a new suite of mixed media drawings titled The Katherine Drawings. Completed earlier this year, this cycle of works on paper features the whimsical stick figure woman holding a birthday cake, a motif that first appeared in Moppett’s monumental work WHATIF/TWILIGHT exhibited at TrépanierBaer in 2009 and featured at the 2010 Alberta Biennial of Contemporary Art held at the Art Gallery of Alberta. Of these new mixed media works, Moppett, in his characteristically droll manner says: “…the cycle is complete and dedicated to my wife who feeds me (figuratively) every day and will, no doubt, explain them to me.”

Ron Moppett is one of Canada’s leading contemporary artists who is often at the forefront of advanced research in the field of visual arts. His career includes a significant number of honours, exhibitions, publications and awards, including numerous Canada Council grants and the prestigious Gershon Iskowitz Prize in 1997. In addition to his painting practice, he has worked as a curator and a teacher. He has exhibited extensively throughout Canada, the United States, and Europe, and two major surveys of his work have been organized: the first at the Walter Phillips Gallery at The Banff Centre in 1982 and the second at Glenbow Museum in Calgary in 1990. Moppett’s work can be found in many prominent private and public collections including the National Gallery of Canada, the Musée d’art contemporain de Montréal, the Art Gallery of Alberta, Glenbow Museum, and the MacKenzie Art Gallery to name a few.

Ron Moppett lives and works in Calgary, Alberta. He is a graduate of the Alberta College of Art + Design (1967) and the Instituto de Allende in Mexico (1968).