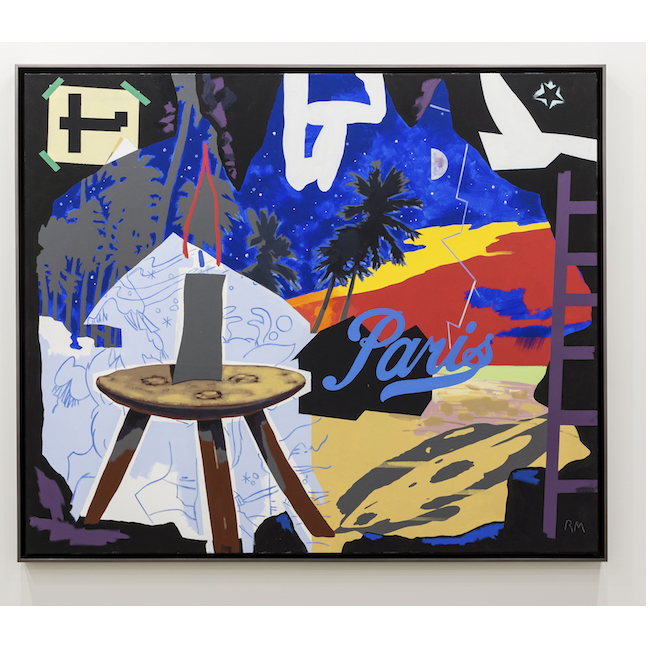 Ron Moppett: Sand & Stars – A Cave With a View

Ron Moppett’s new bold, colourful and lush painting titled Sand & Stars places the viewer inside a cave looking out to a view of a tropical and exotic setting: palm trees set against the rich hues of a sunset at a beach as a half moon rises in the starlight sky. Within the cave are some noteworthy objects: a lit candle atop a three-legged stool; a ladder; a star and white bird above the ladder; a sideways cross-like shape in the upper left hand corner, an outlined drawing of a reindeer behind the stool and candle; and the word Paris depicted in a blue cursive font almost in the middle of the painting. These motifs are frequently presented in Moppett’s works to underscore the familiarity of everyday objects. Both the painting and that which is depicted are sites to be seen.

This grotto setting brings to mind Plato’s Allegory of the Cave from The Republic. One dialogue from the text describes prisoners who live chained to the wall of a cave. They face a blank wall, and they watch shadows projected onto that wall from objects passing in front of a fire behind them. While these shadows are the group’s reality, they are not accurate representations of the real world. Given the commonality of the cave in both Plato’s text and Moppett’s painting, one wonders if Sand & Stars re-presents a multi-coloured variation of the shadows described in Plato’s dialogue and their imagined world.

The cavern setting figures again, this time in a painting by the Surrealist artist René Magritte titled La condition humaine, 1935, at Norwich Castle in the U.K., and numerous comparisons can be made with Moppett’s Sand & Stars.  One of Magritte’s favourite motifs was the depiction of a “painting within a painting”, and the myriad of questions such a work could elicit about representation. In this instance, a three-legged easel supports an unframed painting in front of a landscape seen through the mouth of a cave. Inside the cave, to the left of the opening, a small fire burns brightly. The cave’s opening permits both an inside and outside view, and a sense of simultaneous interiority and exteriority.

Moppett’s Sand & Stars shares the same location as Magritte’s work, but the three-legged easel is a three-legged stool set to the left of canvas, and the fire has now become a solitary candle with its flame. The barren cave of La condition humaine becomes a cave with a few objects resting inside its opening as described above. Does the drawing of the reindeer conceal some element of the beach landscape? Both paintings depict an inside and an outside, a dichotomy that suggests a here and a there, two separate and distinct places. To underscore this notion of place, Moppett explains that the text Paris – placed almost at the centre of the painting – refers the city of Paris, a place far away from his studio, that he views as exotic. Considering the exoticness associated with the beach setting of this painting, Moppett includes this text as a marker of his thoughts. As curator Nancy Tousley once remarked about Whatif/Twilight, 2009, another Moppett painting with a cavernous setting: “ Is this cave a scenic vacation spot or a survivor’s hideaway? Or could this be an allegory of the artist’s studio, where imagination can take you anywhere ? ” While all of these options are plausible when contemplating Sand & Stars, the last suggestion is the most noteworthy: your imagination can take you anywhere – you simply have to let it guide you.

Ron Moppett is a painter living and working in Calgary, Alberta. Born in England in 1945, he immigrated to Canada in 1957. Moppett attended the Alberta College of Art (now the Alberta University of the Arts) from 1963 to 1967, and the Instituto de Allende in Mexico in 1968. Moppett has been exhibiting throughout North America for over 50 years. Over the course of that time he has created   and continues to sustain a unique progressive and influential body of work. Ron Moppett has also worked with the same passion and commitment as a curator, teacher, theatre designer, and mentor to younger artists; his influence in each of these areas has been and continues to be significant. His career includes a significant number of honours, exhibitions, publications and awards, including numerous Canada Council grants and the prestigious Gershon Iskowitz Prize in 1997.