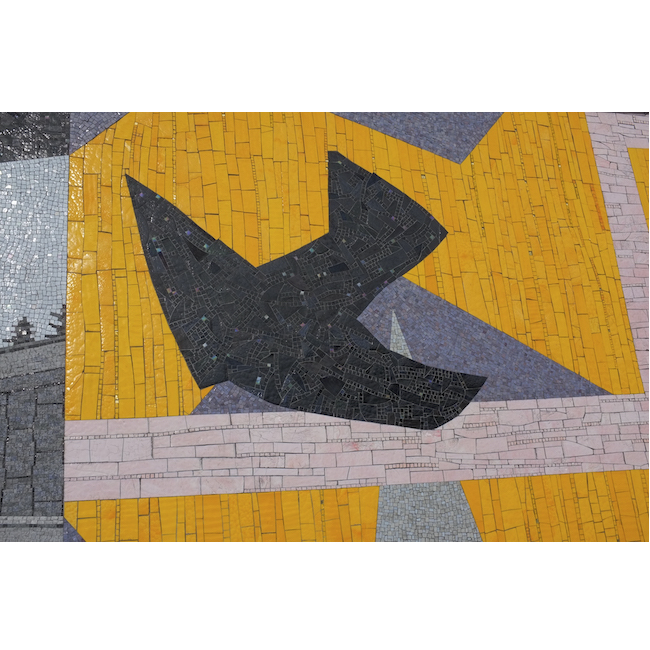 In October of 2012, the Calgary Municipal Land Corporation (CMLC) unveiled Ron Moppett’s epic mural titled THESAMEWAYBETTER/READER in the East Village in Calgary, Alberta. Made in collaboration with Mayer of Munich (Germany), this dramatic and colourful mural measures a monumental four (4) metres high by thirty-three and half (33.5) metres long. It is comprised of almost one million Venetian and Mexican glass, granite, and marble tesserae mosaic tiles on five articulated panels. Since its unveiling in 2012, the THESAMEWAYBETTER/READER mural has become one of Calgary’s favourite public art works and a popular backdrop for fashion shoots, wedding pictures, outdoor yoga classes, and a preferred spot to meet visitors  and take them on walking tours of the East Village and its adjacent neighbourhood Inglewood.

Visually rich, this engaging mural is packed with themes ranging from transportation, Calgary’s geological and social history, personal dreams, and a nod to the vision of William Reader, Calgary’s brilliant if not eccentric, first superintendent of parks.

In celebration of the 10th anniversary of  this monumental mural, TrépanierBaer produced a short video of the artist speaking about the making of THESAMEWAYBETTER/READER, and the circumstances under which it was unveiled. To view, click here.

We are also thrilled to announce that in October,  Cadillac Fairview unveiled the much-anticipated commissioned work titled LAMPLIGHTER by Ron Moppett for its 95 Wellington Street West property designed by WZMH Architects in Toronto. The work has been described as:  “…amazing and the perfect artwork for the site in a great downtown Toronto building.”

With public artworks in Montréal, Toronto, and Calgary, Calgarians and visitors to the city can look forward to a second public artwork by Ron Moppett in Calgary; a massive free standing steel polychrome sculpture made in collaboration with Reggin Industries. Titled BIRDHAT/STARTREE, the piece will be unveiled in the spring of 2024 in a soon-to-be announced location.