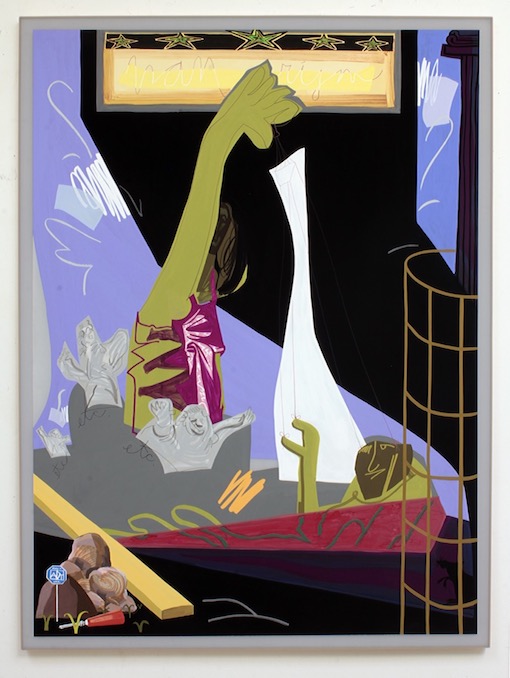 TrépanierBaer is pleased to present Ryan Sluggett’s Sights Being Set, an exhibition of new paintings and a new sculptural video animation titled Recliner with Escapist Literature. Loaded with poignant and ofttimes humorous social commentary, Ryan Sluggett uses “… line, colour field, flatness and depth…” to build wry narratives “…that poke fun about the ways in which ideas gain legitimacy in society.”  As Sluggett states:

I use line in my paintings, and animations to ‘string along’ a narrative. The consequences of this ‘stringing along’, and notions of art as promoting active or passive participation, are used as a loose theme that ties together this body of work. We live in a time when companies like Netflix use Analytics to determine what shows they produce, relying on pre-approved narratives guaranteed to give high ratings. This body of work encourages a more active and skeptical viewer.

In Van Rijn Spectacle (reproduced above, after Rembrandt’s Raising of Lazarus, 1630-1632), the hollowness of such Analytic-determined, pre-ordained narratives is what is put on show. The audience is here depicted as being ‘strung along’ by the network of lines that tie together the composition, lines that become the literal strings that connect the puppeteer’s fingers to the Lazarus figure below. The faux-miracle, depicted here as a kind of basement Broadway show, is shown protected in the foreground by a home security system sign.

Likewise, in a sculptural work included in the show, Recliner With Escapist Literature, an un-sittable sculpture of a lawn chair provides the pedestal for a soap opera in animated form. Matisse’s ‘comfortable arm chair’, this is not. The narrative in this case, with the trite and sometimes violent ‘stringing along’ it entails, is a mockery of the conventions of daytime television and a criticism of techniques used to encourage sedate reception.

Ryan Sluggett was born in 1981 in Calgary, Alberta. He received his BFA with Distinction in Painting from the Alberta College of Art + Design in 1999, and his MFA from the University of California, Los Angeles in 2008. His work has been exhibited throughout Canada, the United States and parts of Europe,including solo exhibitions at the Khyber Institute, Halifax; YYZ Gallery, Toronto; and group exhibitions at the Contemporary Art Gallery, Vancouver; and the Montréal Biennale in 2007. Sluggett’s works were featured in a solo exhibition in Spain at ARCO Madrid in 2008. In 2012 his work was included in the Hammer Museum Biennial titled Made in LA. In September of 2014 his work was featured in the survey exhibition titled Made In Calgary, 2000 at Glenbow Museum. He is also represented  by Richard Telles Fine Art, Los Angeles, California.

Sluggett’s work is included in many public collections including the Booth Collection at the University of Chicago; the Hammer Museum, Los Angeles; the Vancouver Art Gallery; Glenbow Museum, Calgary; the Rubell Collection, Florida; the Alberta Foundation for the Arts Collection, Edmonton; and numerous private and corporate collections throughout Canada and the US.