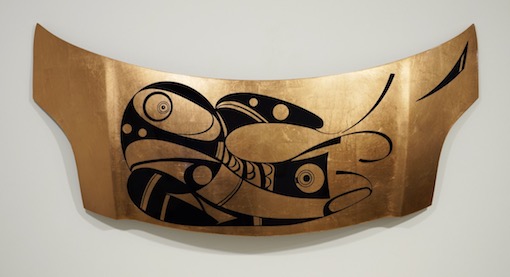 Tell Santa Baby that you will wait up for him and his crew for a midnight soirée replete with delicious snacks if they bring a work from the series Coppers from the Hood by Haida artist Michael Nicoll Yahgulanaas, such as the one listed below:

Hudson Hawk, 2017, is a stunning work inspired by a trip up the Hudson River in New York state, where the artist noted red hawks nesting in the cliffs near the river. The red hawk has particular meaning as it appears on the family crest of the Nicoll clan in Scotland. Additionally, the use of a Yaris car hood is purposeful: as the word yaris is a Somali word meaning something that is greater than what it appears to be. On view now at TrépanierBaer.

Michael Nicoll Yahgulanaas has repurposed car hoods as art to take on new ironic meanings. These car components are copper leafed: copper was the ultimate symbol of wealth among the Haida and is associated with Copper Woman of Haida myth. Throughout the west coast, shields made of copper were exchanged at ever higher values between chiefs at potlatch feasts. Among the Kwakiutl to the south of Haida Gwaii, coppers were particularly associated with the distribution of wealth at wedding feasts. The Haida used coppers as a marker and symbol of wealth, and some wealthy chiefs owned a dozen or more. ( Op. cit, The Canadian Museum of History website.)

Works from the Coppers from the Hood series are in the permanent collections of, and on exhibition at The Metropolitan Museum of Art, New York, as well as the British Museum, London, where one is catalogued as a Treasure of the British Museum Collection.

Santa could also bring a ’54 convertible too, light blue, but his reindeer may not be very amenable to the extra weight in Santa’s sleigh!