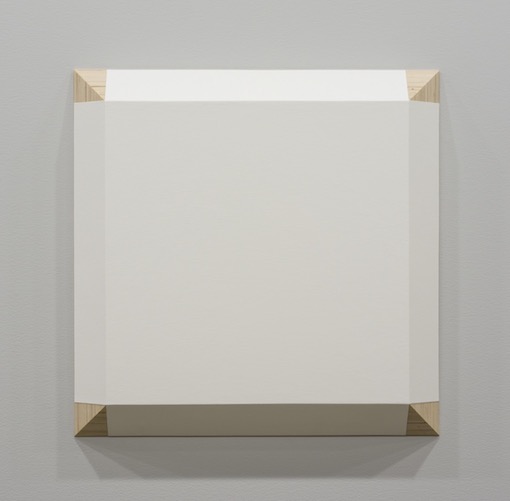 Stéphane La Rue: certain things occur in a (n) other

Over the past twenty years Stéphane La Rue has evolved as a major figure on the Québécois and Canadian painting scenes. Working primarily but not exclusively in white, La Rue has built a precise body of work using the most minimal of means. Often cleverly sculpting the support he paints on, La Rue takes painting back to – as curator Louise Déry has stated – ground zero in his poetic investigation of colour and light. The works are often tranquil and contemplative yet powerfully physical at the same time. There is no exception with his latest series of paintings – twelve luminous white monochromes titled certain things occur in a (n) other. However, with this new work, La Rue realizes a near perfect balance between the painted surface and its constructed support, creating a lightness of being that contradicts the materiality of the paintings. This illusion of lightness and stability creates an atmosphere of quiet contemplation within the work that is deeply satisfying.

Born in Montréal in 1968, Stéphane La Rue obtained his BFA from l’Université du Québec à Montréal in 1991 and an MFA from Concordia University in 1998. La Rue is part of a new generation of artists inquisitive about the re-investigation of formalist painting. His work has been in several solo exhibitions across Canada including at the Musée d’art contemporain de Montréal, Galeries Roger Bellemare et Christian Lambert, the Musée national des beaux-arts du Québec, and at the Foundation Guido Molinari, Montréal. He has participated in group exhibitions in New York City, Lyon (France) and Istanbul, and was featured in the Triennale québécoise in 2011 and the Canadian Biennial in 2014. His work was the subject of a major survey with a catalogue curated by Louise Déry for the Galerie de l’UQAM that travelled to the Musée national des beaux-arts du Québec in 2008/2010. His work can be found in numerous public, private and corporate collections throughout Canada.