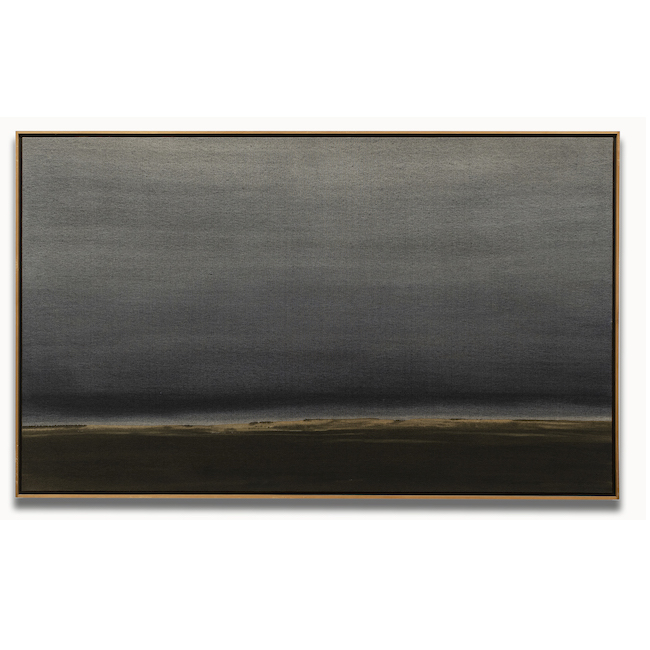 TrépanierBaer is pleased to offer for sale four works from Takao Tanabe’s celebrated Prairie Paintings series.  Included are:  The Land 32/75, 1975; Prairie Hills 10/78, 1978; the etching titled Dark Prairie, 1984; and a beautiful, light, and ephemeral lithograph titled After the Harvest from 1976.

After a twenty-five year career as an acclaimed abstract painter and with an international exhibition schedule than spanned from Vancouver to Montréal; São Paulo to Paris and New York; Cologne to Tokyo, Takao Tanabe progressed into one of Canada’s foremost landscape painters. He began to think about the shift to landscape in the late 1960s. He made his first prairie painting in New York in 1972, the consequence of an acute awareness and observation of the landscape while hitchhiking across the prairies, the first of several such trips he made beginning in 1951. In 1972 Tanabe was offered a summer job teaching at the Banff Centre, and rather than fly to Banff, he drove from Winnipeg. He took his time, observing intensely, and made sketches as he slowly moved through the vast and subtle prairie space. The sketches turned into paintings: Tanabe had arrived.

A year later, Takao Tanabe was appointed Artist-in-Residence and Head of the Art Program at the Banff Centre. He lived and worked in Banff for seven years until 1980. Trained in sumi-e (Japanese monochrome ink painting) and sho (Japanese calligraphy), and well-versed in the discourse of modern and contemporary painting, Tanabe applied himself to his practice with a Zen-like discipline. By 2005, the Prairie Paintings constituted his most interesting and his largest body of work.

Few artists have captured the subtle beauty of the prairie and foothills landscape with such minimal precision and poetic resonance. The Prairie Paintings, as the acclaimed art critic Nancy Tousley has written, are: “…landscape at its most fundamental: sky and land divided by a horizon line, representational images that come very close to abstraction.”

We invite you to visit the gallery to view these extraordinary and singular expressions of place by one of Canada’s outstanding artists.