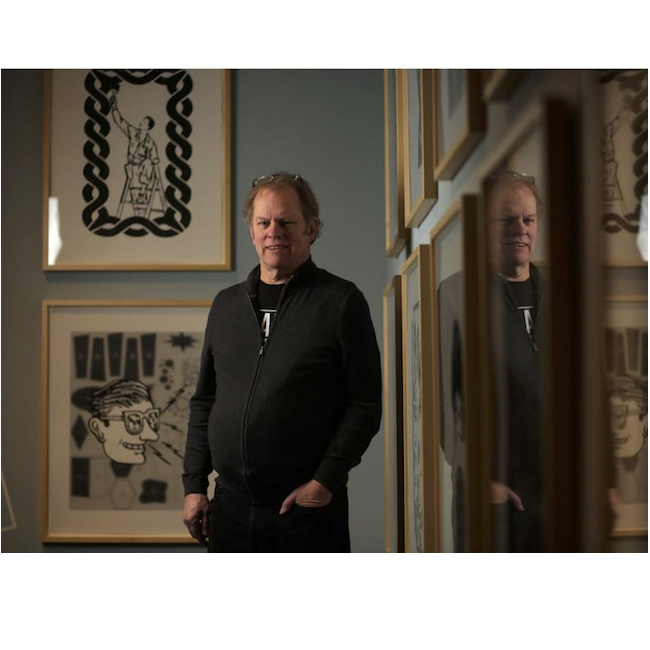 There is nothing quite like getting a tour of a Chris Cran exhibit by Chris Cran.

The renowned artist is enthusiastic and informative. He is meticulous in explaining his techniques and his tools. But most fun of all, at least for the viewer, is his constant encouragement to take in work from different angles. Step closer. Step back. Look at pieces through the camera of an iPhone. Cran wants the viewer to notice how the work changes, sometimes dramatically, with a shift in focus.

Back in 1999, the New York Times suggested Cran “has built a career on tampering with people’s perceptions.” It has become an oft-quoted summary of the artist. While he says he doesn’t really analyze his methods or work — “it’s not a realm of words I deal with,” he says — he acknowledges that he has long been fascinated by an idea about perception that he was introduced to years ago, even if he doesn’t remember where it originated.

“Way back, I heard somebody say: ‘The mind can’t entertain two things at the same time,’” says Cran. “With all of the paintings, I think I’ve paid attention to that. If you give the viewer this to look at and that to look at, now they are travelling. Who is doing the work? They are. They are held. There’s that phenomena, so I’m really interested in that.”

It’s as concise an artist’s statement as we’re likely to get from Cran, whose Chris Cran: At Play is now on display at the Glenbow Museum as part of the One New Work series. Curated by former Calgary Herald arts critic Nancy Tousley, his One New Work is actually a series of new works. They include eight ink-on-foam-core abstract drawings and 24 paintings. They are all black and white. He manipulates stencilled images he found in old catalogues, photographs, yearbooks and magazines. There is an image of a ghostly crowd in the background of many of them. He occasionally alludes to his own work, as in the acrylic on paper piece Recognize Him?, which involves the image of a woman taken from “some advertising from a pulp magazine from the ’50s or early ’60s” presenting a panel that contains a head shape that Cran has used in a number of his past paintings.

Is the emphasis on old ads from the 1950s and 1960s a clue to a deeper theme recurring in the exhibit? In Auctioning Giacometti, for instance, Cran uses the cartoonish image of two smiling, black-suited salesmen — taken from an ad at the back of an old Popular Mechanics magazine — enthusiastically presenting the iconic sculpture of a woman by Swiss artist Alberto Giacometti. Is it a commentary on the uneasy relationship between art and money, something Cran seemed to be comedically exploring in his 1988 oil on canvas Self Portrait Accepting a Cheque for the Commission of this Painting?

“Allergic to overt messages, Cran bids the viewer to complete the work when it comes to assigning meaning,” Tousley writes in the program for Chris Cran: At Play.

“I think I’m at play,” Cran says, when asked if there’s a theme linking the work. “I’m playing. If I want to do this today, I’ll do this; which is pretty much what I’ve done all my career. I do what I want. In the 1980s, I did big realist paintings and then I went into more pop kind of stuff. Then I made abstract paintings and back and forth like that. I kept growing. When I don’t feel like doing something again, I go to something new.”

Born in Salmon Arm, B.C., Cran graduated from the Alberta College of Art + Design in 1979 and first gained significant exposure five years later with his “The Self Portrait Series.” In 2015, both the Art Gallery of Alberta and the Southern Alberta Art Gallery both launched retrospective exhibits, which were combined in 2016 for an exhibition at the National Gallery of Canada. He will be the subject of another show in the fall at Nickle Galleries.

Cran has also been an art instructor at his old alma mater, although he retired in April to spend more time creating in his studio.

As arts training became more and more academic, Cran said he always encouraged his students to be spontaneous and experimental and, most importantly, to play.

“When I was teaching painting, I had students who didn’t have time to make work because of their liberal studies courses,” he says. “When I was a student, I was at the art college and studio time was almost all the time. There was a bit of art history and a bit of English, but that’s it. It was playing and playing and playing. Playing is the thing. It’s about trying out stuff and wandering up a creek. What it’s all dependent on is your own noticing. Nobody else is having that experience. But because it grabbed your interest, that’s a signal that there’s something bigger going on. Your sensibility is tuned to stuff that is unlike anybody else’s.”

Chris Cran: At Play is at the Glenbow Museum until May 26.

Image Credit:
Chris Cran with some of his artwork at the Glenbow Museum
in Calgary, on Thursday February 14, 2019.
Leah Hennel/Postmedia