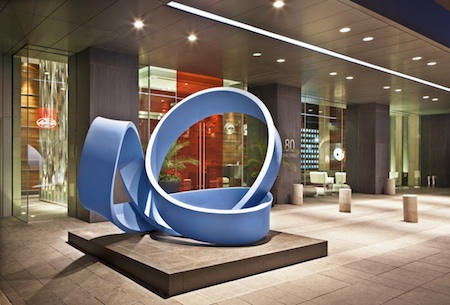 With the unveiling of the 1,400-pound sculpture “Thing’s End” by internationally renowned local artist James Carl, the entrance to the Festival Tower Condominiums atop TIFF Bell Lightbox becomes the unofficial gateway to the Cultural Corridor at John and King Streets.

“Daniels has played a substantial part in the success of this Cultural Corridor”, Councillor Vaughan said.   “The Reitman family has made contributions to public art and to art institutions.  What is really important is the residents who are showing confidence by moving in and animating these streets.”

“This is a fantastic neighbourhood in a city renowned for its great neighbourhoods, so nothing less than exceptional would do,” said Niall Haggart, Executive Vice-President of The Daniels Corporation. “The artist and the work had to be of the highest caliber, and also reflective of this particular location, which is the centrepiece of Toronto’s amazing film festival. It’s a great pleasure to continue to add depth and interest to the Toronto streetscape, both with this wonderful sculpture and with Festival Tower Condominiums.”

Mr. Carl said, “I’m particularly proud that this piece will be part of such a culturally rich location. With ‘Thing’s End,’ I hope to have created something that will resonate with residents and visitors, while making a lasting contribution to the artistic presence of this great neighbourhood.”

One of Toronto’s leading artists, Mr. Carl’s visionary work is sought after for public and private collections in Canada, the USA, Europe and Asia including the National Gallery of Canada and the Art Gallery of Ontario. He has been honoured by the Toronto Arts Council, Ontario Arts Council and the Canada Council for the Arts. The materials for his sculptures vary widely, from cardboard to marble, to venetian blinds. Mr. Carl is an associate professor of studio art at the University of Guelph.