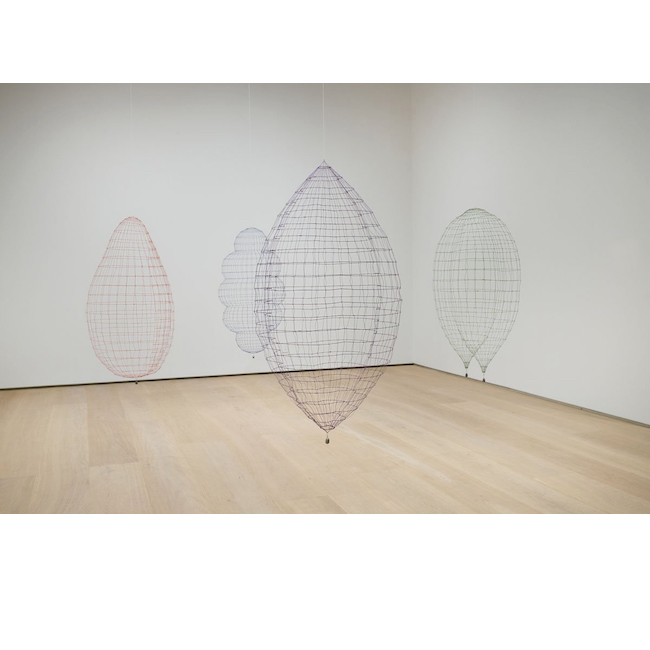 Calgary, AB – February 2019: TrépanierBaer is pleased to announce that Sarah Stevenson has joined the gallery. For over thirty years, her sculptures have challenged the genre’s weighted and static nature by using wire, thread and translucent fabrics. As noted:

A close study of symmetry and the high level of detail necessary in botanical and technical illustration provides an appropriate starting point for thinking about the sculptures and drawings of Sarah Stevenson. Borrowing from the diagrammatic research models of biologists, naturalists, and physicists, Stevenson’s work appears as sculptural illustrations of natural forms and systems, created to further explore and understand the design and laws of nature. Like drawing in air, wire and string are arranged into bilateral and almost symmetrical forms and are suspended from the ceiling. They suggest the apparent weightlessness of a jellyfish, the minute exoskeleton of a zooplankton organism…When seen through each other, these lines criss-cross into a dense kaleidoscope of negative and positive spaces. The subtle colours of the sculptures, which on first glance appear as illusions or reflections, are tinted or white strings that add a shimmering quality to the contours.These sculptures and drawings quietly point to the complex dualities of fragility and resistance, transparency and opacity, tranquillity and unrest, while also offering a respite from the frenzied pressure of constant action.

Announcements regarding future exhibitions of the artist’s work at TrépanierBaer Gallery are forthcoming.

Sarah Stevenson was born in Worthing, England. She grew up in Canada and currently lives and works in Montréal. She received a BFA from the University of Victoria in 1984. Stevenson’s work has been exhibited at various institutions in Canada, the United States, and South America, including the recent exhibition titled Sarah Stevenson: Nothing Hidden (2018) at Esker Foundation, Calgary, curated by Naomi Potter. Other exhibitions of note have been held at : Galerie René Blouin, Montréal (2017); Musée national des beaux-arts du Québec, Québec City (2010); Leo Kamen Gallery, Toronto (2007); Musée d’art contemporain de Montréal (2002); and the Southern Alberta Art Gallery, Lethbridge (1999), to name a few. Her work is included in public and private collections, including the Canada Council Art Bank, the Crédit Lyonnais Canada, and the Collection Lambert en Avignon.