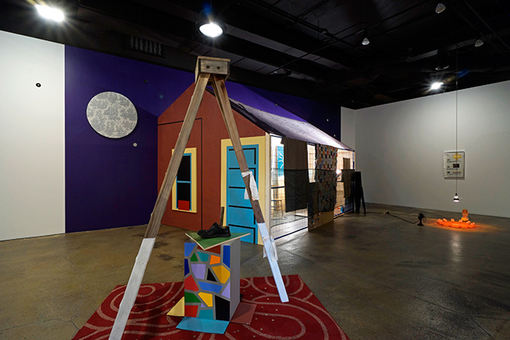 TrépanierBaer is please to present Ron Moppett: Vincent’s Last Studio, an exhibition of recent works including a major installation. As described by the artist:

This project is an elaboration on my earlier fascination with the pathos and romantic mythologies surrounding van Gogh’s life and the public reception of his amazing paintings. The installation incorporates older and new pieces, and work that has been ‘revisited’. In a way, it combines my curatorial interests, as a form, with my studio work as a painter. It is also an extension of larger previous works that I have characterized as ‘walk-in paintings’. The new work is the room – and you, as the viewer, are inside an assemblage with the imagined spaces of individual ‘locations’. I hope – reiteration or repurposing aside – what is familiar territory for me will become ‘new’ again.

Moppett is one of Canada’s leading contemporary artists; his career includes a significant number of honours, exhibitions, publications and awards, including numerous Canada Council grants and the prestigious Gershon Iskowitz Prize in 1997. In addition to his painting practice, he has worked as a curator and a teacher. He has exhibited extensively throughout Canada, the United States, and Europe, and two major surveys of his work have been organized by the Walter Phillips Gallery at The Banff Centre in 1982 and Glenbow Museum in Calgary in 1990.

Moppett’s work can be found in many prominent private and public collections including the National Gallery of Canada, the Musée d’art contemporain de Montréal, the Art Gallery of Alberta, Glenbow Museum, and the MacKenzie Art Gallery, to name a few.  In the fall of 2012 he unveiled  THESAMEWAYBETTER/READER, a monumental mosaic tile wall work measuring approximately 40 meters long by 4 meters high in Calgary’s East Village. Recently, Ron Moppett curated  Made in Calgary: The 1970s, an important survey exhibition of Calgary’s artistic community during that decade, for Glenbow Museum.