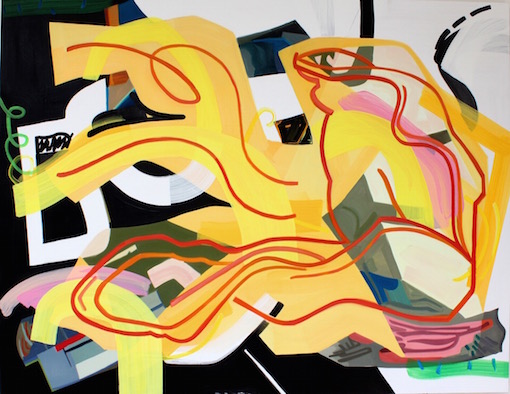 When asked to comment on this new body of work, Sluggett has said the following:

We live in a sculpturally liberated world. As people, we don’t melt in and out of our surroundings the way figures in a Vuillard painting melt into their wallpapered interiors. My painting and video works engage in this ongoing philosophical negotiation between the figure and the ground. Incessant Pinch’ further complicates things through an installation that promotes cross-pollination among the paintings, videos and drawings.

Through the organization of structure in a picture, I am attempting to show something of the energy and complexity of the world we inhabit. As a viewer of art, my point of focus is inevitably shifting. It is when a painting or video has the uncanny ability to mirror these natural shifts, and lurch towards the viewer in fits and starts offering chunks of painterly considerations and possible sites for contemplation, then, like Frankenstein, I think art can start to feel truly alive.

In August of 2013 I sent Alexander Nagel a piece of my writing which asked the question “What to do now that ruptures of the pictorial surface are in effect flat to us?” and he used part of that sentence as the title of a short piece of writing he did for a catalogue of recent work for TrépanierBaer. Since then I’ve been trying to find out if this proclamation had as much truth in it as I thought at the time. In searching for an answer I made a material jump: in this new body of work I have wrapped a layer of clear vinyl over compositions collaged from many materials resulting in a flat surface to paint on. Then, fluid oil paint is the only material I have allowed myself to rely on in completing and unifying the image. The goal has been to make images that evoke the chaos of collage, while nestling into the nuances inherent in a world made entirely from paint.

Ryan Sluggett was born in 1981 in Calgary, Alberta. He received his BFA with Distinction in Painting from the Alberta College of Art + Design in 1999 and his MFA from the University of California, Los Angeles in 2008. His work has been exhibited throughout Canada, the US and parts of Europe including solo exhibitions at the Khyber Institute, Halifax; YYZ Gallery, Toronto; and group exhibitions at the Contemporary Art Gallery, Vancouver; and the Montréal Biennale in 2007.