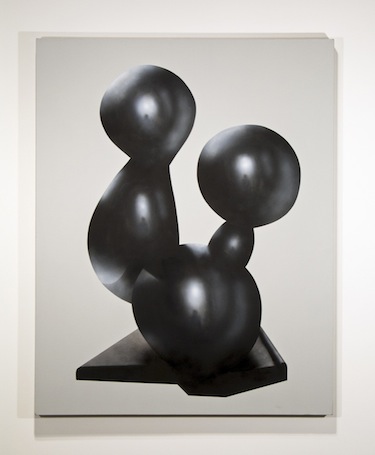 Be sure not to miss the following current and upcoming exhibitions:

Artist turns curator for this show at the McMaster Museum of Art as Chris Cran selects works from the museum’s impressive 6,000-piece permanent collection to exhibit alongside a painting of his own, The Disputed Sculpture (2007). Cran offers a new perspective on the collection, selecting works which he describes as falling into categories of ‘portraits, landscape to abstraction, collage/wallpaper, and squeeze and stretch’, including works by Art & Language, Raoul Dufy, John Hoyland, Sir Thomas Lawrence, Leon Kossoff, Bruce McLean, Robert Rauschenberg and Gerhard Richter.

TrépanierBaer is pleased to present Vikky Alexander’s most recent suite of photographs, The Troublesome Window, as part of the Exposure Photography Festival 2015.

Alexander focuses on the seductive mechanisms of display used in shop windows in Paris, Istanbul and Tokyo.  Consumption and seduction have been a consistent theme for her since the early eighties, and this show will establish the depth of her visual investigation by combining several series of works from different periods.

This latest body of work by Graeme Patterson tells a nostalgic story of two characters who embark on a series of bittersweet adventures. From childhood to adulthood, stages of life are conveyed in idiosyncratic animated videos that accompany large sculptures containing highly detailed miniature worlds. Each of the sculptures reflects on a stage of life. Though Patterson focuses on male friendships, viewers can relate to the subtleties and complexities inherent in all close relationships.

The Foreman Art Gallery is pleased to present this exhibition, featuring the work of Luanne Martineau as part of the New Voices series, which presents her most recent work. Combining various methods of craft with the legacies of 1950s and 1960s contemporary art, Martineau explores the spaces in between art genres, unsettling the boundaries between style and ideology in her enticing and sensual works. The experience of the senses in the artist’s works positions them as objects with overt affect. They invite us to go beyond the initial sensation of the materials (felt, wool, fabric, wood) to grasp their meaningful interconnectedness.

For this exhibition, Martineau has created a new, large-scale textile wall work titled Razzle Dazzle. It brings together a multitude of traditional fibre arts techniques, such as print on textile, cut felt, embroidery and appliqué, in a patchwork of assembly based upon Martineau’s artistic history of “cannibalizing” images and forms from her previous work.

Oh, Canada is the largest survey of contemporary Canadian art ever produced outside Canada. Comprised of more than 100 artworks by 62 artists and collectives from across the country, Oh, Canada is huge in both scale and scope. Too big for just one gallery, the exhibition will be presented at Esker Foundation, Nickle Galleries, Illingworth Kerr Gallery and Glenbow Museum in Calgary, Alberta. This unique collaboration will encourage dialogue, debate, and a deeper understanding of local, regional, and national contemporary art practice. Featuring the work of: Eric Cameron, DaveandJenn, David Hoffos, Luanne Martineau, Chris Millar, Kent Monkman, Graeme Patterson, among others.

Canada’s oldest prison, Kingston Penitentiary (KP), was home to many of the country’s most notorious criminals from 1835 to 2013. The sprawling prison complex on Lake Ontario has been deeply entwined with Kingston’s history and civic identity, but the existing visual record is scant. Through its final months of operation, artist Geoffrey James paid multiple visits to the site to develop a body of photographs documenting and memorializing this legendary institution. The resulting images capture the physical setting, routines and relationships inside KP. James’ photographs engage with the carceral environment and its inhabitants, movingly melding artistic achievement and documentary force.

Over the past months, DaveandJenn have been working closely with Art Gallery of Alberta (AGA) curator Kristy Trinier to produce the upcoming solo project No End. Presented in the RBC New Works Gallery at the AGA in Edmonton, this exhibition will feature two of their latest large-scale sculptures: Don’t Worry Mama and No End, a portrait of a beastly family post-Chaoskampf. These figures will be set against and mirrored in the reflective surfaces of a salon-style installation of their layered resin paintings, the scene of the family reflected in the complex and coded world of their paintings. References to these sculptures and more weave in and out, back and forth, a chronicle without end. This exhibition allows audiences to see the ripples and echoes in their work as it has progressed over the last five years.