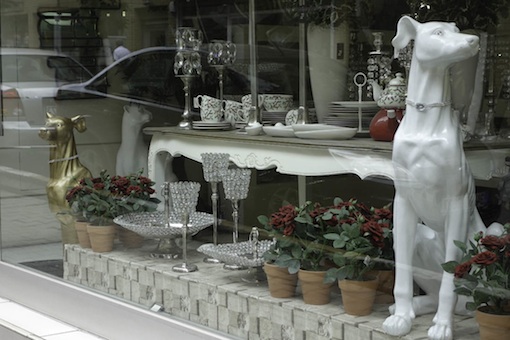 As part of the Exposure Photography Festival 2015, and in conjunction with the opening of Oh, Canada curated by Denise Markonish for MASS MoCA opening at Glenbow Museum, the Esker Foundation, the Illingworth Kerr Gallery, and the Nickle Galleries, TrépanierBaer is pleased to present Vikky Alexander’s most recent suite of photographs, The Troublesome Window.

Alexander focuses on the seductive mechanisms of display used in shop windows in Paris, Istanbul and Tokyo.  Consumption and seduction have been a consistent theme for her since the early eighties, and this show will establish the depth of her visual investigation by combining several series of works from different periods.

Throughout her career, Vikky Alexander has constructed a body of critically engaging multi-media work examining the relation between nature and the fabricated “natural”. Drawing upon the varying aesthetic devices of interior and graphic design, and architecture and media, Alexander’s critique centers on the way culture uses simulation to create fictionalized versions of the perfect world. Her analysis of the artificial impulse in cultural production configures a repertoire of appropriated materials that recall modernism’s promise that technology would lead to power over nature and transcendence beyond the mundane. Alexander’s representations of the simulated natural posit an ironic stance calling attention to notions of absence that simulation typically masks.

Vikky Alexander is a highly esteemed artist who currently lives in Vancouver and works in Victoria, British Columbia where she teaches at the University of Victoria. Her CV reflects a well-established career on both the national and international stages, and her membership in the Royal Canadian Academy of Arts is a testament to her artistic acumen.  Alexander has had solo exhibitions and installations at TrépanierBaer Gallery, Calgary; Kunsthalle Bern, Switzerland and the Contemporary Art Gallery, Vancouver, to name a few. In 2005, Ms. Alexander’s work was featured in a group exhibition at the Antwerp Museum of Contemporary Art where she exhibited four large format colour photographs from the Model Suite Series. In 2012, the National Gallery of Canada acquired an entire suite of photographs from Alexander’s The Island Series; it was subsequently shown at the National Gallery of Canada’s Biennial of Contemporary Canadian Art titled Builders that same year. This series was also shown as an installation at the Eaton Centre for the 2012 Nuit Blanche in Toronto.

Alexander’s work is included in many prestigious collections in North America including the Museum of Contemporary Art, Los Angeles; the National Gallery of Canada; the Deste Foundation, Athens, Greece; and the Vancouver Art Gallery, to name a few. Her work has been the subject of numerous articles in respected art journals and publications in Canada and abroad including Art in America, Canadian Art, the New York Times, Flash Art, Artforum and C Magazine.