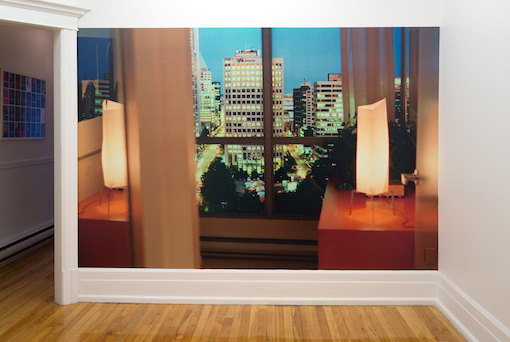 The thematic integrity of Vikky Alexander’s art is always preserved, even when she pole vaults tenses with her trademark alacrity and calisthenic finesse. Her work at least since the late 1980s has in various iterations addressed the interaction or, better, the collision of nature and architecture. For her Lake in the Woods installation in 1986, Alexander covered one of the walls of the New York CASH/Newhouse Gallery with a landscape photomural of sundry confined spaces. The installation is now in the collection of the Vancouver Art Gallery. In 2005, she executed the Model Suite series, with the Bedroom suite as one of its four modular articulations, shown to acclaim two years later at the Trepanier Baer in Calgary. Her Model Suite [Sliding Door] (2015-17), a large-scale photomural, generated extensive commentary when it was installed last year at the Yaletown-Roundhouse Station, Canada Line, in Vancouver, formerly the site of the Canadian Pacific rail yards and later the location of the 1986 World’s Fair…..

Such is the case with the work exhibited now at L’escalier, one of Montreal’s most promising and unique alternative spaces and curated by Lorna Bauer, Vincent Bonin and Jon Knowles. She revisits Bedroom, from the Model Suite series without any suggestion of redundancy or datedness but with the rare nuanced depth we have come to associate with her work. Alexander works from a haptic remove, often staggered through several orders of imaginal magnitude and formal complexity, as is the case here, but the wallpaper-like image installed in situ in what seems an otherwise ordinary apartment – and the materials that underlie it both actually and metaphorically – are magnets for the hypertrophied sense of touch, as the voluptuous eye of the viewer palpates the full array of the available surface in search of secret areas.

To read the entire article please click here or open the pdf listed below.